The history and development of Murugan Temple of North America is a fascinating and simultaneously heart-warming experience for those who have been involved since its inception. It is a story to be told, read and preserved for posterity. It is the story that reflects the glory of Lord Murugan and His immeasurable blessings to all His devotees, wherever they may live and worship him. 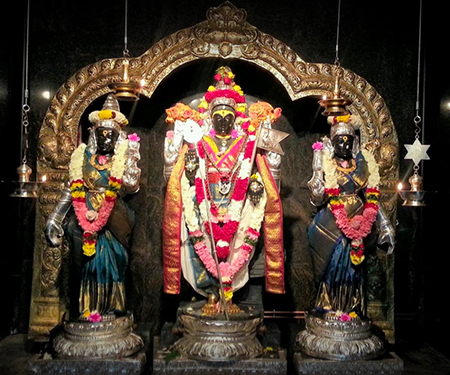 In the decade beginning 1980 Dr. Gopal Gurusamy and Dr. Baskaran were part of a small group that was considering a temple for Lord Murugan. Around the same time, a group of devotees headed by Sri Arumugam Saravanapavan were offering prayers to Sri Valamburi Vinayakar, generously donated by Satguru Subramuniya Swami of Kauai Aadheenam, Hawaii, in an informal setting in Maryland. The two groups with the similar thought met, discussed and decided as proposed by Dr. Gopal Guruswamy to adopt the name ‘Murugan Temple of North America’ for the temple to be built. The vision was to build an authentic temple for Lord Murugan on a national level near the US capital, with the objective of preserving the cultural and ethnic values of our great people. A large gathering of devotees unanimously selected Dr. Gopal Guruswamy as the President of the congregation, they had just $3400 as the seed money.

After an extensive search for about four years, in 1986 an area of 11.5 acres was purchased at the current location of the temple. The determination and hard work of the officers at that time resulted in the land purchase. In 1987, Sri Valamburi Vinayakar was moved to the premises and the Balalayam for Lord Murugan was established to begin the process of planning the temple construction. 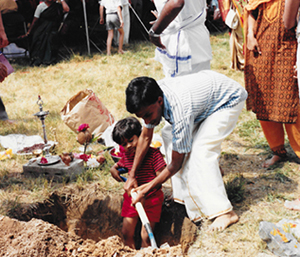 A group of thirty devotees under the leadership of late Dr. Kumaresan of New York visited the temporary site housing the deities and extended their unequivocal support to build the temple. A team of nine Trustees – seven from Maryland (Dr. Baskaran, Dr. Kulathungam, Dr.Ravendhran, Dr. B. Subramanian, Mr. A.Saravanapavan, Dr. M. Krishnamurthy, and Mr. K. S.Krishnaswamy), Dr. V.S. Gandhi from New Jersey, and Dr. Kumaresan from New York – were elected under the leadership of Dr. Gopal Guruswamy as the President. Almost all the trustees continued their hard work until Kumbhabishekam in 1999.

His Holiness Thiru Kirupananda Variar Swami visited the temple and along with Sri Satchithananda Swami conducted the ground-breaking ceremony on June 4, 1989.

In the succeeding years, fundraising efforts continued in many parts of the US, including NJ, NY, Delaware Valley, Pittsburgh, and Chicago area. Despite the setbacks and failures for sometime, Lord Murugan showed us the way to obtain a building permit from the Prince Georges County of Maryland to build the temple in Lanham. The issuance of county permit is a testamentto the tremendous efforts of Mr. T. S. Seshadri, Civil Engineer of the temple, and his Committee.

In the succeeding years, fundraising efforts continued in many parts of the US, including NJ, NY, Delaware Valley, Pittsburgh, and Chicago area. Despite the setbacks and failures for sometime, Lord Murugan showed us the way to obtain a building permit from the Prince Georges County of Maryland to build the temple in Lanham. The issuance of county permit is a testamentto the tremendous efforts of Mr. T. S. Seshadri, Civil Engineer of the temple, and his Committee. 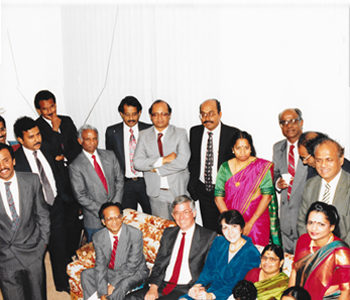 April 23, 1994 marked another milestone with the Vasthu Homam locating the exact place where the shrine for Lord Murugan would be constructed. Undeterred by scanty financial situation, and with the unflinching help of Mr. Sriskanda Rajah as the construction engineer and others in the team, temple construction was completed in 1998. But, 1995 and 1996 were bleak and darkdays due to lack of funds. Six devotees (Drs.Gopal Guruswamy, S. Baskaran, Ramaswamy, J. J. Gopal, Uma Maheswaran and Vasantha Kumar) and their families rallied together and pledged their assets as collateral to obtain a construction loan from Citizens Bank of Maryland. Late Thiru L. Jagadeesa Mudaliar of Chennai established a Kumbhabishekam Committee in the early 1990s and coordinated a major fundraising effort in Tamil Nadu. Through his unceasing efforts he was able to have bronze statues of Lord Murugan and His consorts Valli and Deivayani made in Kumbakonam and shipped to Murugan Temple in time for Kumbhabishekam. 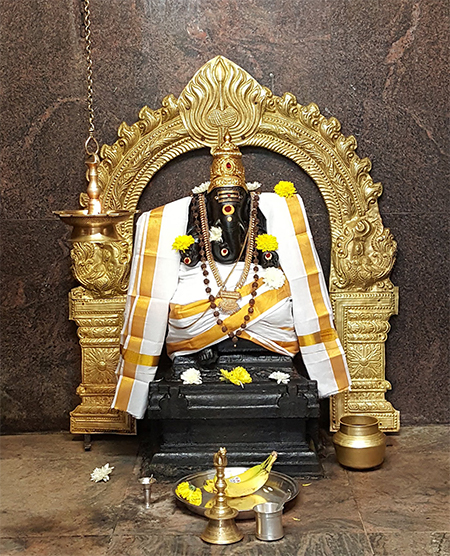 At the time of Kumbhabishekam, the consecration of Lord Murugan, Valli and Deivayani as main deities, and Sri Sundareswarar, Sri Meenakshi, Sri Palani Andavar, and Sri Valam-buri Vinayakar as parivara murthys,was conducted. In May 1999, over 5000 Murugan devotees from across the US and other countries gathered and celebrated Kumbhabishekam on an impressively grand scale for Lord Murugan and other deities of the temple. The celebration was a phenomenal success, to say the least. Food service was excellent under the leadership of Ms. Revathy Iyer. Great saints Thiru Santhalinga Ramaswamy Adigal of Perur Aadheenam, His Holiness Gurudeva Subramuniya Swamy of Kauai Aadheenam, and His Holiness Sri Sachithananda Swami of LotusTemple of Virginia graced the occasion. Arutselvar (late) Thiru N. Mahalingam from Tamil Nadu presided over the entire ceremony. 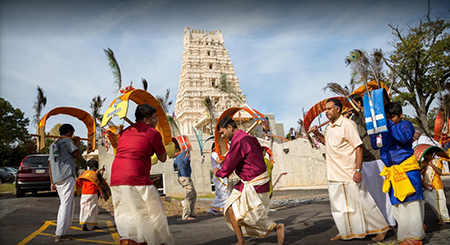 Plans to build a Rajagopuram befitting the ‘Washington Murugan’ began earnestly in 2012. Generous devotees donated about $2 million. The first Phase of the Rajagopuram project used up the donations in order to build the five-tier tower and to decorate the interior (prayer hall) with aesthetically pleasing Indian temple architectural work. Mr. T. S. Seshadri again assumed the leader-ship of the Thirupani Kuzhu (Construction Committee), and along with (late) Mr. K. Loganathan as the coordinator of the project, the team worked diligently to bring the construction project to the extent that we could appreciate today. The Board of Trustees, the Executive Committee and the stand-ing committees of the temple have been involved and contributed their service in every step of the way to complete the project.

Phase two of the project is designed to include a kitchen, a dining hall, amenities for the devotees, a Yaga Sala,and other facilities. Additional funds to the tune of $3 million are needed; we are confident that Murugan devotees will continue their generosity and donate the needed funds to achieve the goal.

A great deal of credit goes to Padmasri Muthiah Sthapathy for his vision, the design of Murugan Temple architecture and his leadership; the beauty of the unique interior architecture and the majesty of the Murugan Rajagopuram are a testament to the outstanding skills of the silpis (temple artisans from Tamil Nadu) and their leader Sri Srinivasan Sthapathy.

July 10, 2016 marked a historic occasion for Murugan Temple of North America that we celebrated the Noothana Rajagopura Maha Kumbhabishekam and consecrate three new deities at the temple. This celebration left an indelible impression in the minds of the devotees of Lord Murugan.

Today, we celebrate each year our traditional festivals for Murugan, Siva, Parvathi, Ganesha and Skandha - such as Skandha Shasti (with Soora Samharam), Karthigai Deepam, Deepavali/Diwali, Shasti, Aru-Padai Veedu Thiruvilazh, Sivarathri and many more.

Visit Our Temple and Celebrate Our Lord Murugan in Lanham, Maryland, USA.